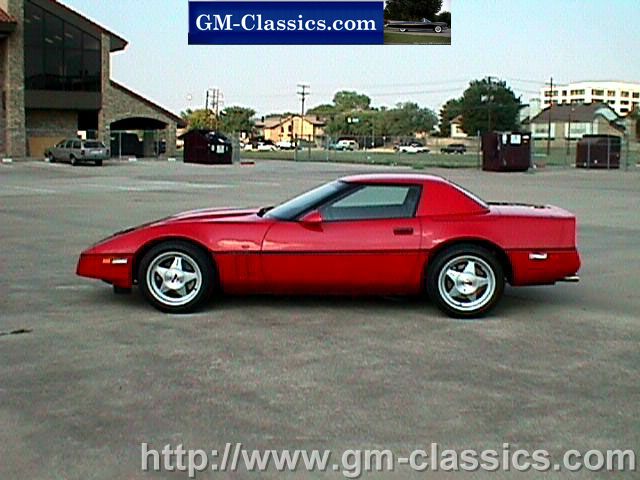 From 1987-1991 GM offered a Factory Optioned Twin Turbo Corvette, known as the Callaway Twin Turbo, or RPO-B2K.  This is the option code.  These cars were regular corvettes ordered with all the good stuff by Callaway, then were sent off the the Callaway Plant in Old Lyme Connecticut  http://www.callawaycars.com  , to become the famous Twin Turbo Corvette.  They were then returned to GM to be sold as a factory car with the B2K order option.  The price on these was upwards and over 100K in the later years, making it the most expensive factory production US car in history at the time.   There are less than 500 actual cars done through the near 5 years of production, making these factory turbo cars, the single rarest group of factory production corvettes ever.  Due to the high price, and the upcoming ZR1 (incredible car I might say), the production of B2K cars fell off year after year, with only a handful of cars actually made towards the end.  In 1992, with the new LT1 motor being standard in the corvette, Callaway discovered it could not survive the Twin Turbo setup, nor were the sales there to validate the expense to upgrade it, thus the end of the factory production twin turbo corvette. Callaway's modifications to the car were extensive and slightly varied from year to year, but gave the car a modest 400HP and over 500 Ft Lbs of Torque towards the end.  The motors were kept 350CID, but were redone with much better internals, etc, then the turbo setup was added along with upgraded cooling and ducting for the intercoolers.  A few of the rare Aerobody cars were produced too with the B2K option.  These are basic body kits that were put on the car, but are as rare as the Callaway itself.  The rare and mega expensive Dymag wheels were also offered on the Callaway, giving it a look like no other Corvette. A stock Callaway is rated to go roughly 190MPH and do the 1/4 mile in 12.8 seconds.  This was the fastest US production car to date, and still holds its own.

#78 here is my Roadster and there is nothing to tell great about it as its nothing but a super rare collectable and pampered screaming #1 condition garage queen.  The original owner was the president of PepsiCo in the late 80s.  He paid mid 70's for the car new.  The wood dash was on the car from Callaway as I came to find out.  Not a fan, but since Callaway put it there, it better stay.  I bought the car around 91 with about 10K miles, it has about 12K now in my 16 years of heating, air conditioning and maintaining this car in my large garage.  In my many years of Callaway's, I can honestly say as far as overall condition #73 is as close as you can get of a near brand new car in a Callaway.  It is a rated #1 car and that takes quite a bit to achieve.  Although it does not drive much, its capabilities are quite impressive.  What else #78 has are all the Callaway power upgrades of the time, which include the Wonder Bar, Intake, Exhaust, Waste Gates, etc.  This was done by me when I purchased the car, all documented with Callaway's records on its serial #.  It was about $7500.00 at the time.  With its totally docile manners, integrity and drivability, it turns the dyno in the near 500RWHP range with over 700 on Torque.  It has never been abused or pushed.  That is what I have Ultra Slow for.   The 4+3 OD has been upgraded by SK transmission and this is the Z51, so its the .68 OD.  What does that mean?  200MPH with its power and gearing and the transmission is bullet proof... Well at least close.  Although Ultra Slow has done 200 this car has not, but it will if you ask that of it.

With all the late model super cars that keep popping to market year after year, cranking out more and more power by the hour, the Callaway Twin Turbo B2K with the factory Callaway upgrades can still hold its own against or exceed most exotics and super cars of today.  Not many cars can say this 20 years after the fact. The stories that Ultra Slow can tell are a testament to how a Callaway can perform. The condition of this car, #73,  is a memory of how a Callaway was brand new, or how one should be if it is to be restored.  With that in mind and the fact there are less than 500 of these factory produced B2K cars over ALL THE YEARS, make about the most weighted formula for a future mega dollar collectable as I have seen in a car.

You can email me at Cadillacman@mcsmk8.com